translated with help of https://www.deepl.com/

How did it all come about?

Probably a little infected by my father, I have always been interested in all technical equipment and its construction and function. At an early age I started to bring all kinds of equipment and machines from scrap or bulky waste, to examine and repair them and also to collect them, much to my mother's dismay. In the beginning these were mainly electronic devices like radios, stereos and televisions…

When my father let me play the lunar lander on his HP-97 in the early 80s, it was quite something special for me. I still remember reading the magnetic strips and the chirping of the matrix printer. But my youthful passion was still for electronics.

My bulky waste rambles also took me to an office machine workshop, from where I always brought home mechanical calculating machines, but also disassembled electronic desktop calculators with nixie tubes and runtime memory or even fragments of the Diehl Decitron with the punched tape bootloader. The spark did not fly yet, but this archaic technology fascinated me.

As with many other young people, it was the Commodore 64 with Datasette that led me into the computer world in the mid 80s. One year later the 1541 was added and still a few years later the C64 was replaced by a C128 of a friend. And like some others, when it came time to switch to the Commodore Amiga 500 I simply kept the old computer and mothballed it. Even when the Amiga was replaced by a 386 PC in the 90s, when the first Pentiums just came on the market, I kept this one too. Why was not quite clear to me yet…

By chance, in the beginning of the 90s, a friend of mine gave me a Taylorix S4 System bequeathed. Whether it was the 8" floppy disks or the amber color of the terminal, I was gripped by retro fever. The hard- and software of past computer systems formed a nice antipole to current hardware and my computer science studies. Quickly also smaller multi-user systems followed, and as I had to rescue a PDP-8 system, which was taken out of service by the University of Freiburg, I soon realized that space problems would be part of my hobby from now on…

As a teenager of the 80's I grew up with wave music and the so cold Neue Deutsche Welle (kind of wave music with German lyrics and style) - but I wouldn't call myself a real big electronic music fan. I like to tinker with SID Sounds and later I loved to track with the Oktalyzer on the Amiga. I had a general interest in synth sounds and it was also a lot of fun to drive the employees of the Freiburg music store Bertram crazy by trying out all kinds of keyboards. But I still had more interest in strings at that time and so I played first guitar and later bass in the best band in South of Baden (southwest part in Germany).

In Berlin I got an early record of the organ virtuoso Klaus Wunderlich from a flea market. And already I was in love with this fantastic organ playing and the sound of the Hammond organ and so I wanted to learn more about the instrument. So I threw myself into the world of organs, electronic tone synthesis and the history of electronic musical instruments. Starting with the Theremin and the electromagnetic sound generation of the Hammond organs or the Hohner pianos, the electrostatic sound pickup of a Dereux organ or the Hohnerola I went over to the early monophonic tube synthesizers and polyphonic transistor organs and to the world's best One Finger Accompaniment. Böhmat (best to listen to Recordings from Ady Zehnpfennig) and came to the weird sounds of early digital sound production. The less perfect the imitation of real instruments with the electric sound generators is, the more interesting the sound experience…

As I became more and more interested in the history of computer technology, my interest in German computer history grew more and more, so it is not surprising that my computer collection is represented by a large number of computers from German manufacturers. These are some programmable desk calculators of the 60s and accounting computers of the 70s but also larger machines of the mittleren Datentechnik (a german classification of medium size data processing technology). Also connection- and memory-programmed controllers or multi-user systems are not missing. In general I developed a passion for computers of the 60s and 70s, when processors were not yet micro.

I try to document many of the computers in the collection but also as much background information about manufacturers and models as possible on my website horniger.de.

For an overview of the computer collection you can have a look at my (incomplete) asset or search and trade list.

The inventory of the musical keyboard collection is still under construction. Besides some historical artifacts from the early days of electronic, electromagnetic and electrostatic sound production, as well as some interesting synthesizers and electric organs, the collection focuses mainly on instruments from Hohner, Casio and toy keyboards.

I AM LOOKING FOR AFFORDABLE (COMMERCIAL) SPACE/PROPERTY (RENT OR PURCHASE) IN BERLIN, SO THAT THE COLLECTION IS BETTER PRESENTED BUT ALSO BETTER TO PLAY WITH! TYPE AND CONDITION SECONDARY.

A tour of the collection is available upon request.

Sightseeing flights through the collection are in planning.

Unfortunately, machines and humans have one thing in common: they become increasingly unreliable in old age and thus get their quirks. An increasingly common problem with older computer hardware is defects in the data carriers. To preserve historical computing technology, however, software is just as important as the hardware on which it runs. Therefore the backup of operating systems and programs is an essential part of retro-computing!

If time permits, I will devote myself to one or the other backup project in the exhibition.

I decided to use retro hardware for one of the main backup computers as well. This has the advantage of being able to address the retro hardware to be backed up more directly. 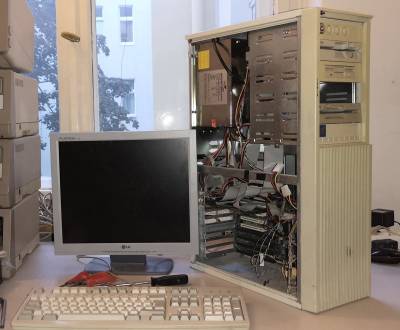 I have plenty of these!

In order to get a good grasp of the topic and to gain experience myself, I have listed some sample projects here. 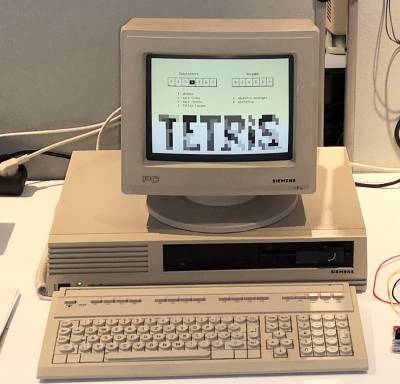 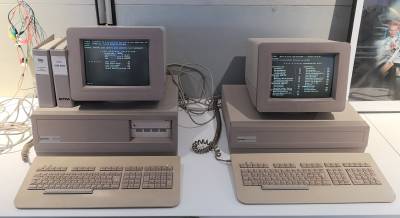 Guided tours through the collection on request

Otherwise I will - with or without you - devote myself to the progress of the backup and repair projects presented here.

Or something you bring me to…