Herbert Lange This exhibition shows various calculating devices and tools that have been used until the 1970s when pocket calculators and computers took over their role. 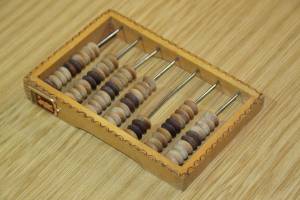 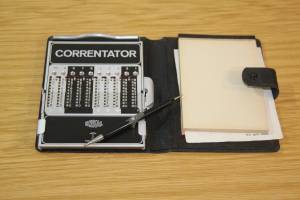 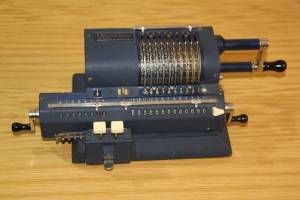 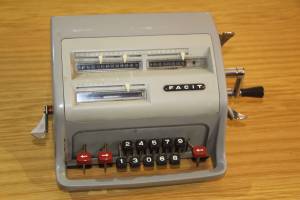 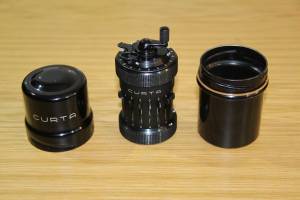 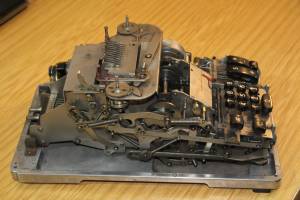 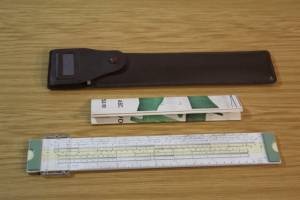 The abacus is probably one of the most famous computing tools and has found widespread use in various cultures and over many eras. An abacus makes adding and subtracting numbers more easy, but the user has to take care of carrying over digits themselves. Other types of calculation are rather laborious but potentially possible. Various designs and Layouts are possible, e.g. the Chinese Suanpan is divided into groups of five beads.

Shown is a Russian abacus (счёты, schoty) with a division into groups of ten beads with some beads colored differently. An exception is a row with four beads for quarter rubles. This shows a popular use in commerce and generally for calculating amounts of money. The model shown could have been a souvenir because it bears the coat of arms and the name of the city of Yaroslavl (Ярослáвль).

An addiator is a clever development of the basic principle of the abacus. In place of beads on a wire, metal strips are shifted in a rack. The position of the strip determines the number selected.

Addition and subtraction are still the main opperations supported. To select a number, the number in the corresponding column is selected with a metal stylus and the relevant metal strip is pulled down. A display at the top shows the currently selected digit. To add two numbers, the first number is transferred to the device using the method described. The second summand is then transmitted in a similar way. When adding, a carry can occur. In this case it is not possible to pull the strip down completely (this is also indicated by a red marking on the metal strip). In this case, the corresponding column is moved upwards instead and an automatic carryover is made to the next column.

In order to subtract, one begins to transfer the number into the device as with the addition. Then the cover with the number labels is folded down. Automatic carryover is also possible with subtraction.

After use or in the event of an incorrect entry, the device can be reset with a lever.

A Swiss model from Correntator is on display. Other manufacturers produced slightly different models, especially in the way that subtraction is possible.

Mechanical calculating machines are a big step forward in terms of functionality and convenience. Entering numbers is much faster and arithmetic operations are carried out by turning a crank.

On display are three different models that were in use from the 1940s to the 1970s. The basic functionality is the same for all devices, but they differ in various details.

The first model is based on the classic design of the Odhner Arithmometer which was invented in 1873 by a Swedish immigrant in St. Petersburg. Over time this machine has been copied many times by various manufacturers. At the end of 1917 the family returned to Sweden where the Original-Odhner company was founded in Gothenburg. In Russia the model continued to be sold under the name Felix. Original-Odhner later became part of the Electrolux group.

The Odhner 127 model shown consists of an input field with sliders, the crank for the arithmetic operations, the result register under the input field, and a counter for the crank rotations. A number is set by setting the slider to the desired digit for each position. The number can then be added to or subtracted from the result register. When the crank is turned clockwise, the number is added and counterclockwise it is subtracted.

Using the counter, multiplication and division can be done by repeated addition or subtraction. A sliding carriage to move the digit in focus helps to make these operations more efficient. Even square roots can be approximated with an algorithm.

All registers can also be quickly reset with smaller cranks.

The second model works very similarly. The main difference is that digits can be entered using a keyboard. The device itself is larger but looks more uniform because, among other things, the sliding carriage is inside the housing.

The model shown is again produced in Sweden, this time from the company Facit with the designation C1-13. The company was a large manufacturer of office machines that was ultimately also bought by Electrolux. In addition to mechanical calculating machines, Facit was also one of the few well-known Swedish computer manufacturers.

While the two previous models proved themselves in everyday office life, they were definitely not very portable with a weight of several kilograms and an unwieldy size (my original Odhner 127 came in a practical case).

That changed with the invention of the Curta hand calculator by Curt Herzstark, a prisoner in the Buchenwald concentration camp. The story of the Curta is too long and too eventful to be fully explained here. After the Second World War, the machine was sold by the company Contina founded in Liechtenstein. The machines are very popular among collectors and are usually traded at very high prices.

The operation of the Curta is very similar to the operation of the Odhner Arithmometer and its copies. However, its size and weight are such that it can easily be held (and mostly operated) in one hand. The input field is along the side of the cylinder with sliders similar to the Odhner. The result register and the counter register are at the top base, as are the crank and the reset lever. The upper ring can be lifted to move the spots. The crank can only be turned in one direction; to subtract the crank can be pulled out a little. In addition, the counter must be switched over with a lever.

The next step in the development is that the hand crank has been replaced by a motor. This enabled automatic operation, similar to modern pocket or desk calculators. In the course of this development, "writing" calculating machines were also getting more common that could print out the calculation operations on a strip of paper.

A problem with these machines is a higher level of mechanical complexity and the electronic components did not survive the long period of time.

The model shown, an original Odhner X-11C-5, is not functional, but allows a look inside such a machine.

All the devices mentioned so far have one thing in common, multiplication and division are carried out by repeated addition and subtraction. Other types of arithmetic apart from the four basic arithmetic operations are hardly or not at all supported.

An alternative to this are slide rules. The results are less accurate, but can be read directly. In addition, depending on the model, a wide variety of other arithmetic operations such as potencies and square roots but also trigonometric functions can be calculated.

A Japanese model made of plastic is shown.