Following the same format as last year's live demonstration of classic Swedish microcomputer ABC 80, Update will this year present another Swedish classic: the Compis. Using a Compis from Update's extensive collection of historic computer equipment, we will demonstrate the operation of the computer, and try programming a bit of graphics in the Comal programming language, a structured BASIC-like language which was popular on the Compis. 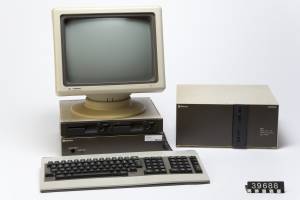 Picture is by Ellinor Algin and under CC BY 4.0.

The Compis was an attempt by the Swedish government to develop a computer specifically for schools. Development started in 1980 but was delayed, and the resulting computer that was introduced in 1985 was one of the very few personal computers to use the Intel 80186 CPU, on which it ran CP/M-86 from ROM. The computer boasted accelerated high-resolution graphics, but being incompatible with every other platform at a time when the PC and Macintosh were taking over the personal computer market, while also being sold only to schools and having very little non-educational software available, the computer was a flop.